Let me introduce you to another of our amazing team member. Give him a proper welcome… 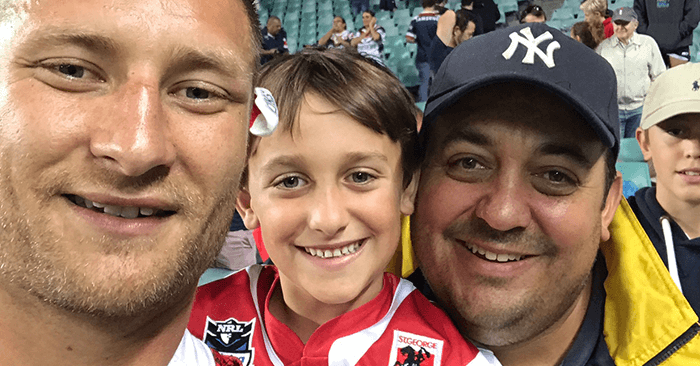 His name is Caine Hemsworth and he’s the Shuriken’s Business Development Manager for Sydney, Dural and Hornsby offices.

Caine is a proactive and organised professional. He cannot be tied down to a desk, so he is always on the move. This job suits him like a glove!

The early years of a successful career

As soon as Caine graduated from university, he was eager to start his career. He got a job in tax and accounting on the Gold Coast in 1999.

After a few years on the Gold Coast, he decided to relocate to Sydney.

Here, Caine worked for a fully integrated firm that provided accounting, wealth management and mortgage advice. He considers that this role was invaluable for his professional knowledge.

“In 2007, I made the move into funds management as a Business Development Manager,” Caine remembers. His responsibility was to advise accountants and financial planners on the benefits of investing in tax effective forestry managed investment schemes.

Caine’s career continued to shift and grow. “Following the acquisition of my employer by a competitor, I was offered a position with the competitor as the Senior Manager for Product Development and Administration.”

This job opportunity offered Caine and his family the chance to move to Launceston for two years. “We really enjoyed our time down there!” Caine remembers, smiling.

Then, the company entered Voluntary Administration and he was offered a new role with the Administrator.

“In this new role, I was continuously learning. I was working with some of the leading and most influential minds in accounting,” Caine highlights. “Finishing up in February 2016, I had some time off to recharge.”

When cooking a BBQ on a mid-winter’s night…

This time off was a blessing in disguise.

While Caine was cooking a BBQ on a wet and cold winter’s night up at the rugby club with yours truly (Andrew Jeffers), they had an interesting conversation.

The next thing you know, a few weeks later, Caine started working at Shuriken Consulting as our Business Development Manager.

We are so excited Caine joined our Shuriken team.

He is efficiently working with our three offices in Sydney, Dural and Hornsby. Caine works closely with our Wealth Management, Insurance and Digital teams to cross-promote all our Shuriken services.

Apart from his main job, he is also the unofficial role of being our CEO’s Chauffeur. Caine puts it this way (with a smile on his face), “I live close to Andrew, so it makes sense to use one car if we are travelling to the same office. This is how I ended up being Andrew’s Chauffeur”

Caine’s favourite part of this job is, “educating and assisting clients with their financial affairs.”

Like a busy bee, Caine is always moving between our three offices, either working with our teams or meeting new clients.

“I would like to say golf. But, with three boys, I haven’t had time to play as much as I’d like,” Caine confesses.

Caine is a sportsman at heart. ”I am involved in my boys’ sports. This year I am coaching both my 7 and 10 year old’s rugby teams.”

Caine also loves to cook. “I am no Gordon Ramsay,” he admits, “but I enjoy cooking. It’s a great way to destress.”

Indeed, cooking has been proved to be therapeutic. Especially when you get to eat it!

Meet another indispensable member of our team Kim McKenzie: The Office Manager Of Shuriken Dural

Not many people know this about Caine:

“Before my life became this hectic (with having three boys), I used to play poker,” says Caine.

His passion for poker started back when he lived in Tasmania. He was commuting weekly between Launceston and Sydney. “Playing poker was a great way to meet people and beat the boredom off a hotel room,” Caine remembers.

He wasn’t just an amateur, though. Caine reminisces, “In 2009, I won a poker tournament which resulted in a trip to Crown Casino to play poker on TV. Unfortunately, it didn’t go too well,” he laughs.

If you would like to chat with Caine to find out more about Shuriken’s services and how they can help you develop your business, get in touch with him below:

“Imagine if every time you made a step forward in your business, it had an unimaginable impact on the lives of others…”

Shuriken is at the forefront of accountancy, providing clients with a broad range of services, coaching and mentoring.

Contact Shuriken if you want to launch or grow a business or if you want to get a clear action plan on how to achieve your financial goals. We can help with benchmarking, cashflow forecasting, payroll and much more.